Jamshedpur, October 31: Sergio Lobera is banking on his team’s collective effort to tide over star striker Ferran Corominas’ absence when they take on Jamshedpur FC in a Hero Indian Super League (ISL) 2018 clash at the JRD Tata Sports Complex, Jamshedpur, on Thursday.
Last season’s Golden Boot winner Corominas has once again been a key for Goa with the Spanish forward currently the joint top-scorer with six goals and four assists to his name. 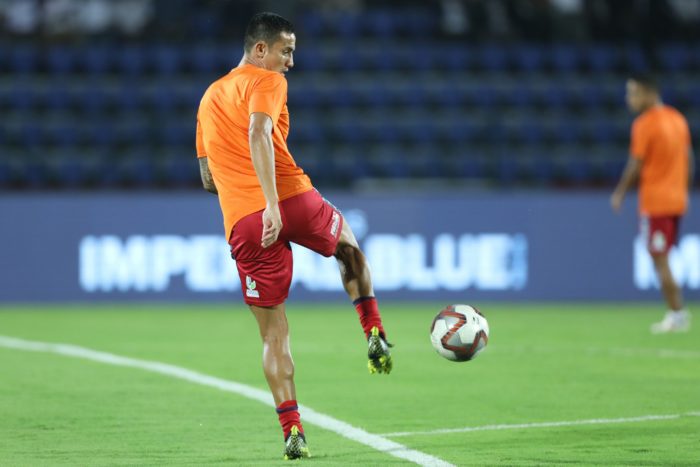 However, Lobera will have to make do without his services on Thursday after Corominas picked up a straight red card in the side’s 4-2 win over FC Pune City. This is the first time that the Spaniard will not feature for Goa since he made his debut in the ISL against Chennaiyin FC last season.
“It’s a collective effort. It is important to put up a collective effort on the field and get the result,” said Lobera.
Jamshedpur FC coach Cesar Ferrando also felt that FC Goa, as a team, are much more than just Coro.

“He is a good player. Goa is good as a team. I didn’t have any separate plan for Coro. I am preparing for Goa as a team. If we play as a team, we can win. I am just thinking about my team,” Ferrando said.
Ferrando’s men started their campaign with victory at Mumbai City but have since endured successive draws against Bengaluru FC, ATK, NorthEast United and Kerala Blasters.
The Jamshedpur-based outfit looked to have broken that frustrating run in the clash against Kerala but two second-half goals from David James’ men put paid to all such hopes.

“I am very happy with the team. I was getting angry during the (Kerala Blasters) game because we committed some silly mistakes. We committed three mistakes against ATK, one against NorthEast as well. Blasters missed a penalty in the last game and then during their first goal, we had six players inside the penalty box yet we could not clear,” explained Ferrando.
Despite that setback, Ferrando will be glad that his star signing Tim Cahill got off the mark in the league with his first-half goal.
The Spanish coach’s side are one of the four remaining unbeaten teams in the league and will be locking horns with an opponent who have been firing on all cylinders.
Unlike Jamshedpur, Goa started their campaign with a draw against the NorthEast United before registering three impressive wins on the trot.
Lobera’s men have been turning heads with their goal-scoring exploits and have already registered 14 of them so far in four matches.
“It is a very tough game (against Jamshedpur FC). They are a very competitive team. I know the coach from Spain. I know the style of his coaching. So expecting a very competitive and tough game,” said Lobera.
The Gaurs have prevailed over Jamshedpur in both their previous meetings in the ISL last season. Can they continue that dominance in the absence of their star forward?
Tags: FC GoaFCGgoaHero ISLindian super leagueISLJamshedpurjamshedpur fcJFC
0Likes
Leave a comment