Bengaluru, November 15: Strikers always hunt in pairs and nobody does it better in the Hero Indian Super League than Sunil Chhetri and Miku.
The Bengaluru FC pair contributed a total of 24 goals last season with the Venezuelan hitman notching up 14 and the captain tallying 10. They have started this season exactly where they left off. The pair have already accounted for seven of the 10 goals Bengaluru have scored so far and have got Carles Cuadrat’s team chugging along on full steam.
It is not just their ability to score that is troubling Bengaluru’s opponents. 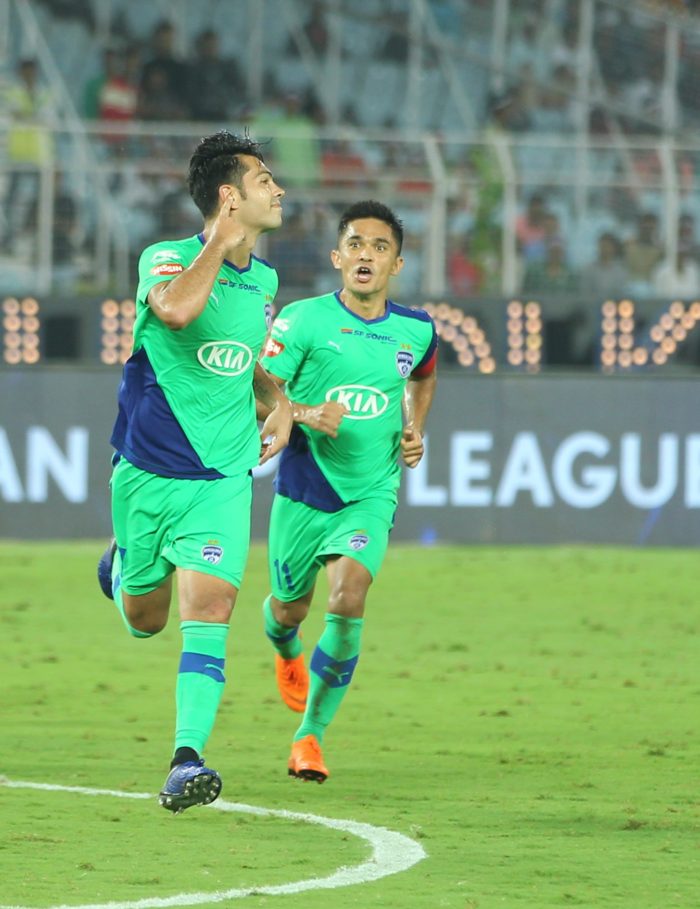 Miku and Chhetri have a chemistry between them and complement each other very well. While Miku is the centre forward, Chhetri plays off him or from the left wing. But both are intelligent with their movement in and around the penalty box that makes it very hard for opposition defenders to pick up their runs.
“We have great communication on the field – with our body language. Just by looking, we know what the other is thinking. It helped us get results last time. We want to do the same this year,” said Miku.
Focusing on Miku allows Chhetri to trouble rival defences and that plays right into Bengaluru FC’s hands. That probably explains why Bengaluru have failed to score only once in their previous 16 ISL matches (a goalless stalemate against FC Pune City last season).
“Miku is a top-class player and he’s showing everyone exactly why he possesses tremendous quality. And we are all benefitting from it,” said Chhetri.
Both of them have a keen sense of occasion as well and are big-match players. Most of their goals have come at key junctures of games. Bengaluru FC’s 2-1 win over ATK is a prime example. After taking the lead, ATK were defending stoutly and it took a terrific strike from Miku on the stroke of half-time to turn the match around in favour of the Blues. They would go on to net a winner in the second-half and pick up all three points.
Chhetri picked up an injury during the clash against arch-rivals Kerala Blasters FC and has now been ruled out for two weeks. He has opted out of India’s international friendly against Jordan away on Saturday and there are fears he may not be able to recover fully to face FC Goa in a table-top clash when action in the ISL resumes next week.
If that happens, can Miku shoulder the scoring burden alone for the first time, or will he miss his partner-in-crime? Your guess is as good as ours.
Tags: BengaluruBengaluru FCBFCHero ISLindian super leagueISLmikuSunil Chhetriwest block blues
0Likes
Leave a comment