Pune, 15th September 2018: Some of FC Pune City’s youngest talent were at the heart of the team’s historic run last season. With Alwyn George and Shankar Sampingiraj, the club looks to continue doing that. The midfielders who joined the club this season have set expectations for themselves and from the club too. 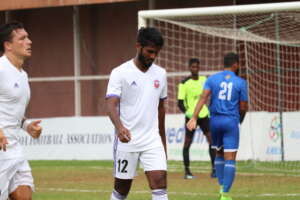 “I wish to remain injury-free and maintain high levels of fitness for the coming season,” says Shankar of what he expects from himself. Shankar comes in to the FC Pune City fold after having an impressive outing for Bengaluru FC leading upto a national call for the U-23 side. The Karnataka born began his professional career with HAL and later signed with Pailan Arrows followed by a stint at DSK Shivajians (on loan)

His fellow midfielder Alwyn also is clear about his priorities. “I want to get as much game time as possible here at FC Pune City and am doing everything I need to do for making that happen,” says Alwyn who has a homecoming of sorts. The Nagpur lad is playing for a Maharashtra based club for the first time in his professional career.

Alwyn started his career with the Tata Football Academy in 2008 and signed his first professional contract with Pailan Arrows four years later. It was midfielder’s stint at Dempo that caught the eyes of everyone as he was named best young Indian player of the season for two years in a row. Post this, Alwyn played in Indian Super League with FC Goa, Delhi Dynamos FC and later Bengaluru FC

On their reasons to joining the Stallions, both had similar reasons. “I spoke to a couple of friends including Alwyn who told me this was a good place to be since they had a great setup and also did well last season so,” explains Shankar.

When enquired about a season spread across seven months with breaks in between, the two medios weren’t too worried about it. “We will have a set program with our coach and support staff guiding us through it ensuring we are match-ready at every point of time,” Shankar clarifies. For Alwyn, the break in December will be the one he will look forward to. After representing India at the SAFF Championship in 2013, Alwyn will be looking to don the Blues for the upcoming AFC Asian Cup in January 2019.

“I have been with the national setup a while back and my aim is to breakthrough this time around for the Asian Cup,” a determined Alwyn says. But the focus remains on the opportunity at hand. “For me, playing competitive football is always the priority. If I get to play for India in any form, that’s the ultimate goal of playing good football at club level,” explains Alwyn.

For now both Alwyn and Shankar believe their teams pre-season is going well and they are only getting better each day. “We look good to put up yet another historic season. Wait for us to get on the field,” concludes Alwyn.